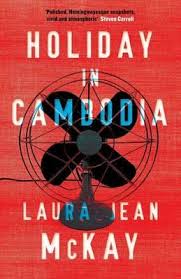 Laura Jean McKay will be launching her short story collection, “Holiday in Cambodia”, at Monivong Books on Norodom on 19 October 2013.

Most of the 17 stories of “Holiday” (title from the 1980 Dead Kennedys song) are set in the modern day, with a few between 1951 and 1994. Individual stories are linked by more than just the Cambodian setting – the 1951 vampire-Lolita of The Deep Ambition of Rossi, scheming her way into Prince Sihanouk’s bed, blood dribbling down her chin, reappears as the modern-day Susan from Australia, syringe in her pouch, in Vampires from Cambodia; Le Cercle Sportif, the chic colonial in-place of Rossi, crops up again, shabby and down on its luck, as the neighbour of a modern-day massage parlour-cum-brothel in Massage 8000; clueless characters from the appallingly but appropriately named NGO, Suffer the Children, crop up across a number of  stories. The links form an ironic supra-narrative, so that a story about the murder of a union representative trying to get better conditions for workers in a T-shirt factory (Holiday I Love You) casts a shadow over another in which a tourist observes that bar-work must be better than a T-shirt factory (Taxi). Each story stands alone, but a slow reading will bring out this extra layer of texture.

The themes of Holiday are sex and death. Three backpackers and an urchin in “Route Four” are bound for execution on the train to Kampot; the unnamed expat girl in The Expatriate (yet another employee of the ubiquitous Suffer the Children) comes face to face with meaningless death; in Coming Up we wait for a body to surface from the bottom of a lake, while yet another of the ladies from Suffer the Children reveals her inability to understand or communicate with the Cambodians (though her mother’s doing just fine). Alongside this is the search for the real Cambodia, sometimes bizarrely funny (A Pocket Guide To Phnom Penh), sometimes just bizarre (The Real Cambodia, which introduces the image of the apsara/Real Cambodia as destroying vampire).

McKay writes with a great economy and precision, and clearly has a special empathy for this country. Cambodia occupies a special place in the collective Western imagination, one defined by drugs, easy sex, and senseless violence – “See Cambodia and Die” is a slogan I’d advise the local tourist authorities not to consider. It has become the emblematic “other”, the place where the rules end and chaos begins. “Holiday” has been praised for its “Hemingwayesque snapshots,” but what while that’s true in its way it fails to capture the spiritual essence of the book: what springs to my mind more Paul Bowles, the nothingness that lies behind the sheltering sky.