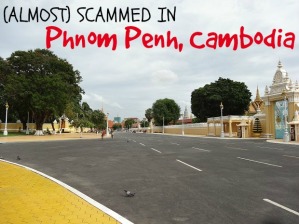 When I started this post the almost-first thing I looked for was an illustration. I typed Filipino Blackjack Scam into google, hit Images, and look what came up: Bren On The Road (never heard of him till now, but Hi Bren!) Bren posted this story on his blog on 7 July, with a lovely pic that I’m stealing. I’ll leave him a message requesting permission.

Anyway, Bren says that he was almost scammed by Filipino con artists on or around 7 July. First day in PP and he’s walking aimlessly near Riverside when two middle-aged Asian ladies hail him and start a conversation. (WARNING SIGN 1: THEY APPROACHED HIM FOR NO REASON).

Well actually they did give a reason: they asked him where the Royal Palace was. Excuses excuses. He said he didn’t know. “Oh, you not from round here?” (WARNING 2: THEY WANT TO KNOW IF HE’S A LONG-TERM EXPAT OR A ROOKIE TOURIST).

He says no and they ask him where he’s from. New Zealand he says. The eyes light up. “You know Aukland? My sister/daughter/ you name it is going there!” (Yep, that’s warning sign 3).

“I can’t believe we met someone from Aukland/Manchester/Ulaan Bator! What a coincidence.” (If he’d said he was from Vladivostok…) “My sister/daughter/pet poodle would love to talk to you, do you think you could come and see  her for a minute? It’s not far.”

Bren escaped. From what exactly, he never knew exactly (he wriggled off the hook before they could pull him up, gut him, fry him, and serve him with a light Chablis). If you want to find out, this rather older post by LTO, and the comments. Basically it involves rigged gambling sessions with the threat of violence.

But the real point is, these Filipino scammers (and they are always Filipino) are thick on the ground in Phnom Penh at the moment. I’ve met two ladies in the last two weeks. The first one lost interest when I said I live in PP. The second time I had my camera and offered to take her photo. Never have I had such a quick and negative reaction to the idea of a portrait. “I warn you, if you take my picture it’ll be expensive!” And she glances at a bench where what might be a couple of her buddies are sitting.

These guys can be dangerous – see this very good article from Travelfish. Don’t go anywhere with them, just walk away. Be rude if you must – your politeness is what they use to reel you in.

2 thoughts on “Scam in Phnom Penh”