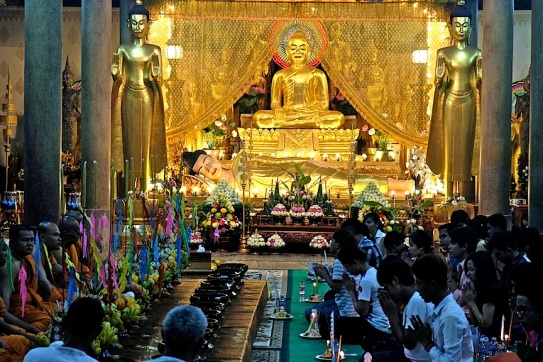 This is what happened at Wat Lanka last night, about half way through the 15-day Pchum Ben festival.

The main gate of the monastery was crowded, vendors selling plated food offerings (balls of rice, but not ordinary rice-balls), lotus-sellers, and beggars. The festival itself was taking place in the main shrine hall, which on this night was ringed with closely-spaced basins each holding a candle.Inside the hall the monks were sitting along along one long wall and the worshipers along the other, with a table of offerings in the middle. These were for the monks. The Buddha-image was brilliantly illuminated at the far end of the hall (Wat Lanka has a very handsome Buddha image), and a traditional orchestra was ready with gongs and drums at the main door facing the Buddha. 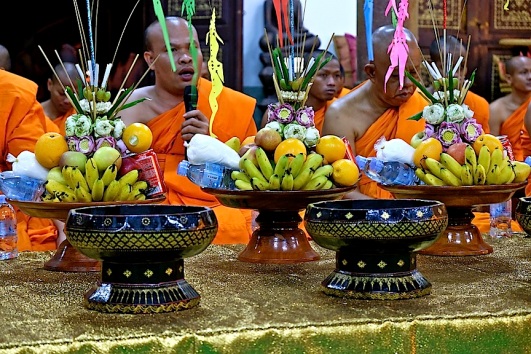 The head monk gave a sermon, and when he’d finished the people got up and went out through the side doors to gather at the main door, each carrying a candle and a food offering plate. (The number of rice balls on the plate increases from day to day, in preparation for the final day – so this initial 14 days is the “gathering” that’s mentioned in the name pchum ben, “rice-ball gathering”).

There they they listened to a brief sermon or instruction from the chief achar (specialist in ritual), and then filed in procession around the outside of the shrine hall, pouring water into the candle-lit basins together with hundred-riel notes.

That finished the main business of the ceremony. As people left the monastery they went to a special enclosure between the shrine hall and the main gate where a model of Mount Meru had been built in sand, and added more sand to each of the five “peaks”. At the gate they gave more hundred-riel notes to the beggars, and then home.
Pchum Ben, along with Khmer New Year and the Water Festival, is one of the three major festivals of Cambodia. The name means “rice-ball gathering”, and the rice-ball itself is made of sticky rice and sesame mixed with coconut cream.  It takes place over the first 15 days of the Cambodian lunar month of Pheakta Bot, which falls in September/October of the Western solar calendar, andl is almost invisible to foreigners, especially casual visitors, because almost everything happens in the very early hours of the morning, around 4 a.m.

The basic idea is that ghosts have been set free from hell for fifteen days, and the ghosts  are hungry – one of the worst punishments they endure is being given huge distended bellies, tiny mouths, and long narrow throats. That’s the physical version – a more sophisticated reading is that the dead were greedy for things (not just food) in life, and are now kept from rebirth by their lack of merit (not food).
Over the course of the first fourteen days (or nights), people are supposed to visit seven different monasteries, finishing up with a major and longer version on the fifteenth night. On this night the rice-balls are thrown to the ghosts gathered around the perimeter of the shrine hall.
The ghosts are not thought to eat the rice-balls, any more than the dead in a Western cemetery are expected to smell the flowers. The significant part is the act of giving. Giving is good for the soul, because it’s selfless. This “good for the soul” is what Buddhism means by “merit” – giving generates merit for the giver. Buddhists are constantly doing acts that generate merit, from giving to monks to honouring their house-gods, but Pchum Ben is special because it directs the merit to the dead, for the sake of their rebirth.
Which, of course, is not to say that a lot of people might not interpret the giving of food quite literally. There’s a polite but grim tussle going on between the monks and the laity over just how the festival should be celebrated, with the monks saying that throwing rice away is a waste of food and attracts rats and stray dogs. Some monasteries insist on a no-throwing policy, others allow it, but I doubt that any are really comfortable with it.
Pchum Ben has good roots in Buddhism, both because the theology of merit is totally Buddhist and because the Pali scriptures mention hungry ghosts.

Nevertheless, Cambodia is the only country in Southeast Asia that has a festival like it. Just why, and how it developed, is a mystery. It’s very like the Chinese hungry ghosts festival and so it’s been suggested that it might have begun in the 19th century when Phnom Penh was a Chinese city – but that doesn’t explain why it’s equally popular in the villages. Apparently it’s mentioned in Khmer inscriptions dating back to the pre-Buddhist period, which has led the senior Buddhist monks to say it’s Brahmanical and not Buddhist. The fact is, no one knows for sure. In any event, Pchum Ben is a powerful means of uniting Cambodians around the idea of the ancestors:

In the evening of the same day (the day before the fifteenth and final day), people gather around the worship their ancestors; they lay out mats covered with white color cloth and white pillows. Between both sides of the mates, they place foods, desert and Ben rice. The oldest of the families kindle the incenses and candles to invite spirit of the dead to come for dinner and to ask the spirit to bless them in return. At dawn of the next day, the descendants make the rafter make of banana tree, loaded with rice, to drift away from their ancestor to take their places. In same houses, they perform festival as the last evening to pray to the village God to bless them. They perfume the horns of the cattle to ask for forgiveness that they had uses them for their work for the whole year. Farmers scatter Ben rice in the paddy fields to ask for fruitful produces later on.