Cambodian spirit-flags have long fascinated me. Their functions are pretty clear – they’re to signal that something is going on, a festival or funeral or whatever. Aesthetically they’re genuine art, elegant and original. Their origins and symbolism, however, are totally obscure. This post is a summary of the best article I could find on the ‘net, a guest post by Dr Rebecca Hall on the blog Alison in Cambodia. The photos are also hers – I’ve not had much luck photographing banners, they tend to blow in the wind and they’re a long thin shape that doesn’t fit easily in a normal 2:3 photo.

The Khmer word for a flag or banner is tung, and the commonest type is the tung rolok. These are the ones you see in the grounds of monasteries, usually outside the main prayer hall (the preah vihear). I’ve been told that they should always go behind the hall, never in front of it – but in Phnom Penh they’re always in front of it, never behind. The friend who told me this was quite shocked.

The tung rolok announces a festival or celebration. As the photo shows, they’re huge. The number of bamboo rods through the body indicates who’s being honoured – father, mother, monks, Buddha, the teaching, etc.

Note the overall structure of the flag: a triangular “head,” a body, and two “feet” at the bottom. Note also the dark patch of cloth at the crotch, where the genitalia would be if this were what it looks like, a humanoid figure. Note also the little triangular pennons off the main body. 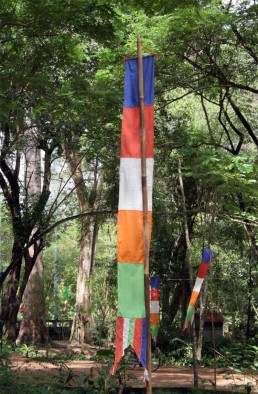 Next is the tung sasana, the “religion flag”. The idea of a flag for Buddhism came from an international conference in Sri Lanka in the early 1950s, and all Theravadin countries have adopted it. The colours stand for the multi-coloured rays of light that broke forth from the Buddha at the moment of his enlightenment, illuminating the entire world. They symbolise the various attributes of the Buddha; there were five rays each of a pure colour, and one of the other five mingled.

So this banner is comparatively new, but it’s become completely acculturated and is frequently seen around monasteries – and unfortunately I have no idea exactly what it’s function is.

Finally we come to the most interesting banner. Dr Hall’s informants, who were mostly abbots and achars (achars are the monastery’s experts in ritual) all told her they were called tung aphithoam. I gather that aphithoam is the Khmer pronunciation of abhidamma, which is Buddhist metaphysics. Dr Hall had been expecting to hear them called tung krapeu, meaning crocodile banner, but the abbots and achars never did. Her translators called them crocodiles, but not the experts.

Here’s the tung aphithoam/tung krapeu. It looks very like the tung rolok, but it’s always white. It’s a death-banner. It’s hung outside a house where someone has recently died, and stays up for 3 to seven days, both being significant periods in the life of the new ghost.

And their function…  Dr Hall’s informants told her it’s to tell people there’s a death and funeral. The cremation takes place at the end of the seven days, with a big funeral feast.

I wonder though. In these seven days between death and cremation the ghost stays around the house, not yet aware that it’s dead. It’s invited into a new “house” (the coffin), and the word “coffin” must never be mentioned lest it be frightened. In other words, the seven days immediately after death is an extremely risky period for the ghost, and so I wonder if the flags have something to do with it – but I don’t know for sure.

And what about the crocodile? The reason Dr Hall was expecting to be told that this is a crocodile flag is that that’s the way it’s described in the scholarly Western literature. One very famous study links the crocodile to the naga, and suggests that the original earth-spirit of the Khmers, before nagas arrived from India, was the crocodile. Crocodile and naga and Preah Torani the earth-goddess all tie together, somehow, though it’s not for me to say just how. But for sure, earth-gods combine the functions of death and fertility (those patches on the groin of the tung rolok), and when I was walking around the monasteries of Phnom Penh with my friend, the one who was shocked to find banners at the front of the prayer halls, everyone we spoke to called them crocodile flags. And those little triangular pennons make the “body” look very crocodilian to my mind, though I’ve never seen them discussed. 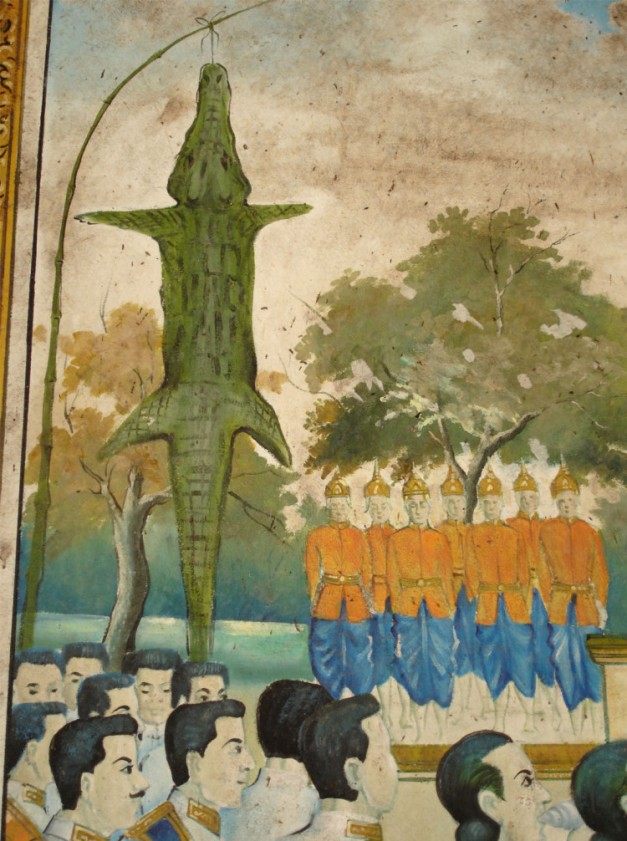 There’s a story. Once upon a legendary time there was a monk who transformed himself into a crocodile and swallowed a princess. Bad croc. The king sent his army to rescue the princess, but alas, when they cut open the belly of the beast they were too late, and beauty was dead. So they skinned the crocodile and hung its hide up at her funeral.

That particular story ties in with ritual human sacrifice traditions (it has to do with the pagoda where the princess’s funeral was held, and a requirement for sacrificial virgins), but this post is long enough already.