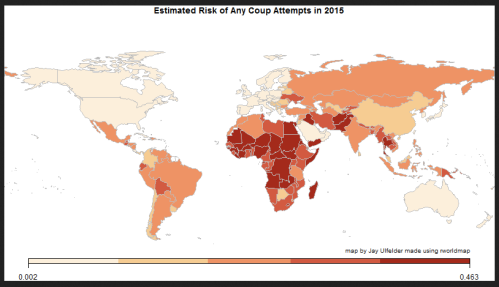 There’s a blog called Dart-Throwing Chimp, run by an expert in probability theory and the art of predicting the unpredictable. In other words he gives probability rankings, not predictions as such.

Every year he brings out his forecasts of coups around the round. Probablility of coups, that is. As you’d expect, North America, Western Europe and Australasia are pretty cool. So also, and less expected by me at least, is Saudi Arabia.

At the other end are the hot risks. Thailand, for example. Cambodia ranks below Thailand.

He also uses crowd-sourcing as an  alternative to modelling – Thailand comes out quite different (it drops from number 17 in the at-risk rankings to something so far down that I don’t care to count).