Yama, central courtyard of the National Museum in Phnom Penh. The figure is also known as the Leper King.

Yama, god of death and judgement, attended the Buddha at his Enlightenment. He was there because enlightenment means an end to samsara, the cycle of death and rebirth over which Yama presides.

Yama is present when every man dies, holding up a mirror to the dying soul. In the mirror the soul sees the Six Realms – the three worlds of men, gods and asuras, from which rebirth into a higher realm is possible, and those of animals, demons and hell-beings (ghosts). Death therefore comes before birth, because death is not the end. The soul is about to undertake a journey to the realms of Yama.

“If I had answered, There is a soul, would that be in accordance with my knowledge that all dammas are without Self?”

“And if I had answered: There is no soul? That would have created greater confusion in the already confused Vacchagotta, for he would have thought: Formerly I had a Self, but now I do not.”

Vacchagotta questions the Buddha about metaphysics: “Do you hold that the universe is eternal or not?  Do you say it is finite or infinite?” To each question the Buddha answers “no.” From Metta Dharma Refuge 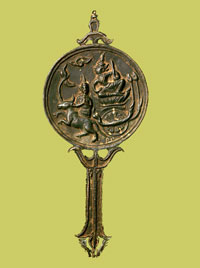 Popil, a ceremonial candle-holder essential to many ceremonies – the candle is stuck to the disc with its own wax,

Vinnana is a rarefied notion. Ordinary Cambodians talk about pralung. Pralung is that which animates. It is not uniquely human. Animals have it, as do plants and even certain objects. Pralung is multiple – every individual has nineteen, according to the classic texts. Each night the pralung leave the body and each morning they return, and our dreams are the records of their wanderings. A person who has lost consciousness is said to have lost his pralung, and a folktale tells how some little girls lost in the forest are scared out of their minds “as if they had lost their pralung.”

The pralung seem to be rather simple-minded, even gullible. Evil spirits seduce them into the forest with lying promises of a life of luxury and ease, although in fact the wilderness is a place of great danger. If the pralung listen to the voices and wander off their human owner becomes psychically weakened, prone to bad luck and illness.

There is therefore a ritual for calling the pralung back to the body. It involves the incantation of a poem called the Hau Pralung (“Calling the Souls”), one of the oldest works in Khmer literature and the most widely-performed non-Buddhist work in the Khmer language. The poem itself is the most important ingredient in the ritual, but it also involves various symbolic props which appear over and over in Khmer religious ceremonies: balls of sweet sticky rice, cones made of rolled banana leaves, sticks of black sugarcane, and candles tied to leaf-shaped candle-holders called popil. Some of these, like the rice and sugar cane, are symbols of domestic life, but the popil, which is a modern version of the ancient Shiva-linga, is plainly phallic.

Tying threads to an infants wrists to keep its pralung in its body.

A full hau pralung is extremely dramatic. It begins by invoking the protection of the Buddha and all the gods and the tevoda in streams and hills, then warns the pralung of the ghosts and evil spirits in the forest. It appeals to them to come home to “silk mattresses and wool carpets, cushions and pillows,” and ends by welcoming them back to the family. “The nineteen pralung have arrived and are entering their home. After three days of calling I am tying strings around your wrists to unite you with your relatives, old and young, grandmothers and grandfathers. May you recover as of today.”

The two photos above are from Reyum, part of an article reviewing a publication on the Hau Pralung.

Spirit Worlds, a study of Cambodian belief and society – due out October 2015.