Plong Chanthou is 79 years old and a widow. She was born in Battambang province and moved to Phnom Penh when she married. In 1975 the Khmer Rouge evacuated her family to Battambang, but to a different district from the one she was originally from. During this time she lost all her four children, three girls and a boy, plus her beloved husband, who had been a civil servant for the Lon Nol government. First he was forced to work, then he was killed.

Immediately following liberation in 1979 she ran into the forest and ate wild fruits and roots to survive. After three weeks she made her way back to her village, but found that her parents’ home had been appropriated by soldiers. So she walked all the way to Phnom Penh to look for the house she had owned with her husband, but that house was also now occupied by others.

She ended up living with relatives, but they treated her badly. She was suffering deep depression after the Pol Pot years and her losses and had no wish to find a job, so she helped in the house like a servant in exchange for meals. It was a bitter time. Eventually she went to live at Wat Champa monastery in Ken Svay district in Kandal and later at Dombok Kpuos, before finally settling at Wat Sampov Meas in 1993.

Wat Sampov Meas in Phnom Penh is now her home. She gets up at 4 a.m. to clean, sweep and cook breakfast for herself and the monks, then she prays and serves the monks breakfast, after which she washes the dishes. Breakfast is no sooner out of the way than she prepares, cooks and serves lunch and washes dishes again, and prays once more in the evening. She follows the Eight Precepts and never eats dinner.

She has her own room in the monastery, away from the monks, where she cooks her own food and boils her own water. She never eats her meals in the monastery as she believes that being able to live there is more than enough. She lives on donations and gifts. Her younger brother sometimes gives her money, and some of her old friends and classmates also help regularly.

She worries about old age. “When I get really sick and unable to help the monks, I will ask my niece in Battambang if I can live with her and ask her to look after me. I know that she is kind and will take care of me before my departure (death). I never want to bother the monks or anybody at the temple.” She believes that due to her good deeds her niece will arrange a good funeral for her when she dies.

Since 1979 she has had no other passion besides learning about Buddhism and doing good things to gather merit. “This life has been most unfortunate and lonely and miserable for me. My good deeds in this life should help me to avoid that fate in the next. People tell me I should file a complaint with the Khmer Rouge War Crimes Tribunal to seek justice for losing my family, but what use is revenge? I tell them I would only do this if it could bring my children and husband back to be life again.” 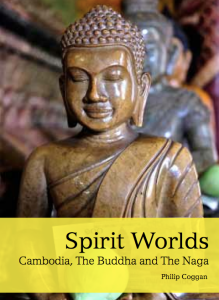 Spirit Worlds, a study of Cambodian belief and society – due out October 2015.