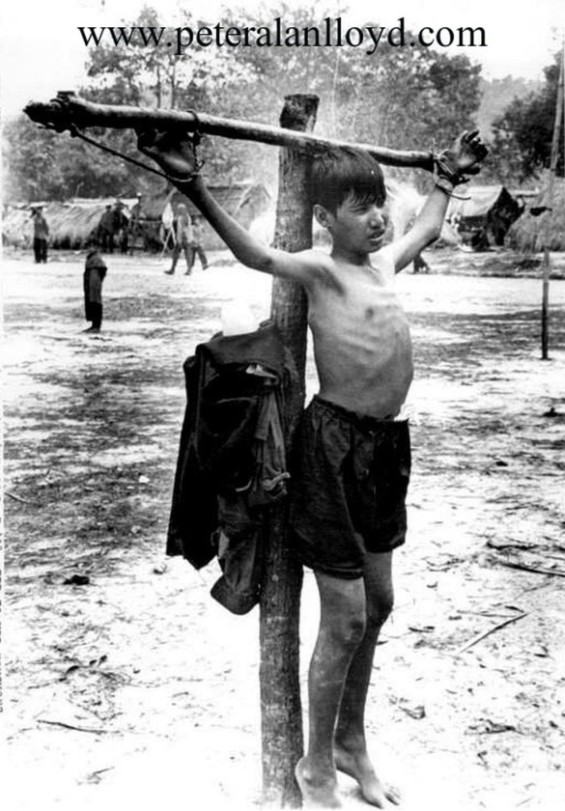 “Boy punished, Khmer Rouge Crucifixion style, for stealing food in a Khmer Rouge refugee camp … Before this he’d been beaten and would have been killed had third parties not been present in the camp.” Uncertain copyright, found on PeterAlanLloyd.com

I found this interview with Nin Noy, a former KR village police chief (and village headman now, forty years later) on the blog of Peter Allen Lloyd, a freelance writer and author living in Thailand with a special interest in the Vietnam War. The setting is Ratanakiri province, in the far northeast corner of Cambodia.

Nin Noy says he acted only on orders from higher up – failure to act would have been fatal, and though he doesn’t say it, acting without orders would doubtless have been equally fatal. He denied that the KR had a plan to kill anyone – it was all the doing of the Chinese! He had never killed anyone himself. He was evasive and untrustworthy and possibly deeply troubled.

Nin Noy had been in his early 20s when he was organising killings for the KR, and in that capacity he presumably murdered anyone with an education. Lloyd found it ironic, to say the least, to be sitting with him in his current role as village chief under a banner proclaiming “Together, we promote the protection and safety of children both at school and in the community.” 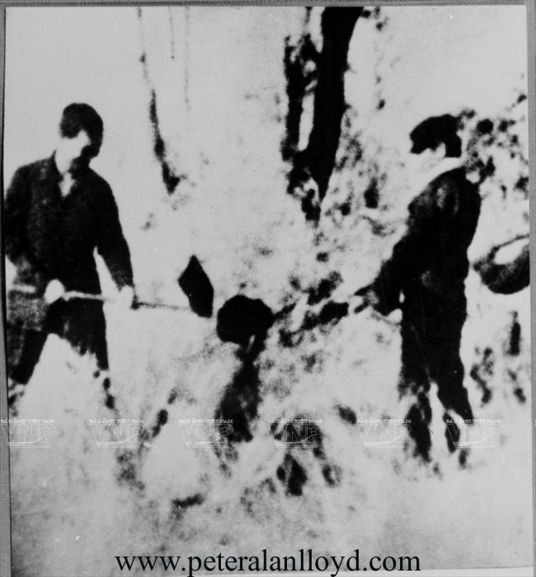 “A disturbing image of what looks to be a Khmer Rouge murder in progress, with a prisoner held at gunpoint while another Khmer Rouge soldier swings a hoe.” From PeterAlanLloyd.com

Nin Noy had fought against the American-backed Lon Nol forces in the early 70s. He said that the American bombing of eastern Cambodia had certainly helped the KR with recruiting, but not nearly so much as the overthrow of the beloved King Sihanouk. “Nobody but America supported Lon Nol.”

At the end of the interview the old KR reprobate had the nerve to ask if a tip might be possible. “[N]o fucking way was I going to allow a Khmer Rouge official to profit from his time in that genocidal organisation, even though he’d apparently done ‘nothing wrong’ during his completely innocent period as a Khmer Rouge Police Chief.”

The post, and the blog, are well worth reading. He’s written a novel, too – it’s linked on his blog. 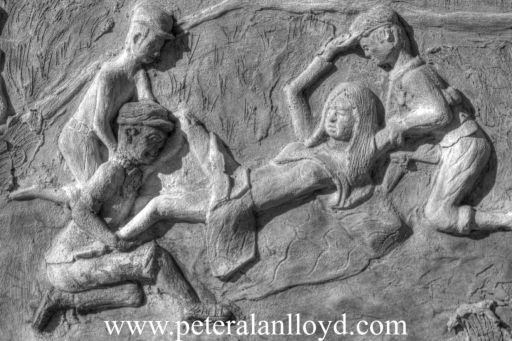