Over May 4-6 1999, in a village near the Thai border, Christophe Peschoux interviewed the notorious Duch, one-time commander of the Khmer Rouge interrogation centre S-21. Duch was arrested two days later and has been imprisoned ever since for his offenses against humanity. By mutual agreement the interview was kept in a drawer until preparations for his trial got underway in 2006, at which point it became part of the public record. In the course of his trial Duch denounced the interview, claiming it had been extorted under false conditions. The charge shocked Peschoux, who devotes several pages to refuting it and suggests that the about-face may have been connected to Prime Minister Hun Sen’s political campaign to eviscerate the international tribunal in order to prevent it implicating past Khmer Rouge who now serve in his government.

Peschoux, who was representing the UN High Commissioner for Human Rights in Cambodia, has now published the text of the interview “to put it at the disposal of those who are interested in the history of Cambodia and of the Khmer Rouge movement, and the role of that S-21 played in that history.” It forms the core of this important book, which is essential to any study of the Khmer Rouge period. Peschoux’s Introduction forms an equally important part of the story, setting out the context of the interview, the history of the subsequent trial, and a nuanced and humane sketch of a man who has come to be seen as a monster, the embodiment of inhuman evil. 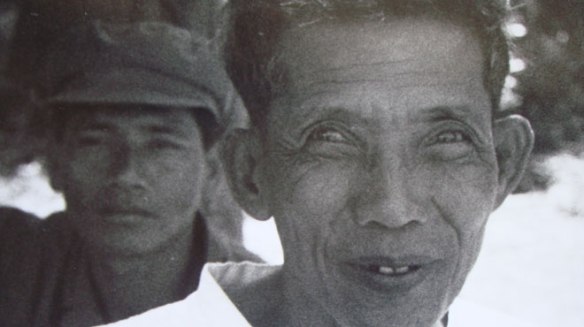 Duch was born in 1942 to a humble family in Kompong Thom province. Thanks to scholarships he was able to study at the elite Lycee Sisowath in Phnom Penh and the National Institute of Pedagogy, from which he graduated in 1965, and was sent to teach high-school mathematics at Skoun in Kompong Cham, where he was remembered later for his commitment to his students and to social equality.

But Duch had imbibed socialist ideas at the Institute and in 1967, as Sihanouk cracked down on leftists, he joined the armed resistance in the maquis (the forest). The teacher had become a revolutionary. In 1968, following a spell in Sihanouk’s prisons, he joined the infant Communist Party of Kampuchea and was assigned to run the security police of the “Special Zone” surrounding Phnom Penh. Thus began the next stage in Duch’s career, the one that was to earn him the title of chief torturer to the Khmer Rouge.

Duch’s work at rooting out Sihnouk’s spies seems to have pleased his superiors, for following the fall of Phnom Penh in 1975 they appointed him to head up S-21, the new party security office in the capital, in which position he was responsible for the torture and death of some 14,000 people.

S-21 was where the Party uncovered traitors within its ranks, and all inmates were Party members. Duch stresses his lack of autonomy within the system: he sent nobody to S-21, all arrests were ordered or authorised by the senior members of the Standing Committee, namely Pol Pot, Nuon Chea, Sao Pheum, and Ta Mok. Even this overstates the case, as Sao Pheum was distrusted by the other three and was about to be arrested and sent to S-21 himself when he committed suicide in 1978.

Nor, according to his own account, did Duch have any control over what happened inside S-21. His political masters expected him to produce confessions, and confession meant interrogation, both “hot” (with torture) and “cold” (without). Duch says he did not believe torture to be effective and wanted to dispense with it, “but the abilities of my subordinates were limited and I was unable to achieve this. … Sometimes, my subordinates used methods which I could not believe they had employed. … I learned that my former primary school teacher [Din Saroeun] had been tortured by insertion of a piece of wood into her vagina. … I was shocked…” (Peschoux notes that the torture and execution of his primary school teacher and her husband, and a handful of others whom Duch had known intimately and respected, were instrumental in his ultimate loss of faith in the Party and its cause).

The point of the confessions was not to discover truth – the fact of arrest presupposed guilt – but to uncover “threads” (khsae in Khmer), the vertical networks of patronage and loyalty that give structure to Cambodian society. Every Khmer is either a patron or a protégé, and one man’s protégé is another man’s patron. “[I]f one person is considered an enemy, all persons linked to that person are likewise.” Once uncovered, the threads had to be destroyed. “[A]ll those who were sent to me had to be killed, whether man, woman or child, without distinction.”

Peschoux: “Even the children? Were they also considered as enemies?”

Duch: “Yes, even the children.” (Peschoux has a footnote: “Kaing Guek Eav averted his face, visibly affected, and plunged into his memories.”)

The interrogations and killings at S-21 can be viewed as a logical conclusion to the KR obsession with spies, played out within traditional Khmer client-patron networks. This explanation seems unconvincing: Cambodia is still built on khsae, but today’s leadership does not find it necessary to discover and destroy entire “strings” of real or imaginary opponents, including children. 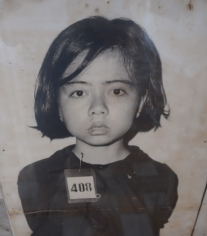 Peschoux believes, as Duch came to believe, that what was at stake was much simpler: the cold-blooded pursuit of power. During the armed struggle of the five years before 1975 the various KR regional commanders recruited their own troops, who were loyal to them, not to the Party. (This, incidentally, has always been the way armies were raised in Cambodia; the creation of a professional army answerable to a single central authority is one of the unremarked but essential steps in the creation of a “modern” State). When the stage of armed struggle ended in 1975 Pol Pot and his innermost circle had no troops under their direct control, and thus were at a disadvantage vis-à-vis the zone commanders. Peschoux remarks: “One of the historical interpretations of the conflicts and bloody purges of the following three years sees [them as] Pol Pot’s effort to impose his direct control of the true power that was in the hands of the heads of the zones.” Duch ultimately came to believe that Pol Pot and his circle had no real interest in whether the people he interrogated and killed were really spies, but only in rooting out potential rival khsae. His reaction was to withdraw from politics after 1975 and, eventually, to return to being a village schoolmaster.

So who is Duch? In Peschoux’s words, he was “an intelligent, gifted, well-taught, and generous young man of modest origins, animated, we suppose, by an ideal of liberty and justice, [who] joined the revolution and became, little by little, a cold and pitiless torturer. … [O]nce the ashes of history had cooled and greater [personal] autonomy was regained, he became again an ordinary man, capable of exercising choice and moral discernment.”

Peschoux says of his first sight of Duch: “He resembled any man of his age, a benign Cambodian grandfather—timid, affable, and very ordinary. … [N]othing in his appearance or his manners suggested a devilish personality or character. He was an elderly, very ordinary former torturer.” The transformation from teacher to torturer had been motivated by the noblest of mirages, a world of justice and liberty, but it led Duch to monstrous crimes; when circumstances changed, he again became a teacher.

Duch’s confession to Peschoux is certainly self-serving to a degree. It lacks the realia conveyed in this underling’s report of the interrogation of Kim Huot, Duch’s revered former teacher and husband of the Din Saroeun who was tortured with a piece of wood in her vagina, a report which was delivered to Duch in the routine way:

To paraphrase Truman Capote’s In Cold Blood, our sympathy for the murderer is not deep enough to accommodate either forgiveness or mercy, but we would do well to remember that he is a man like us. Or as Peschoux puts it, Duch’s testament is “an occasion to reflect on what this extreme experience can teach us about ourselves and our humanity, and what our humanity can turn into when crushed in the jaws of history.”