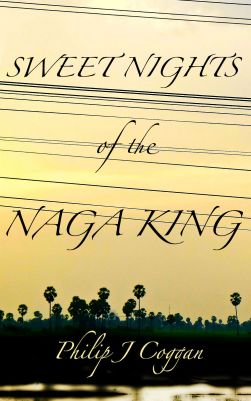 The first 600 words of a new long short story or short novella (about 30 pages) concerning a girl named Sophea and her protector, the Naga King.

Click on the cover for the complete story at a very reasonable $1.99 – far less than the price of a cup of coffee. (I’d be quite happy to give it away for free, but can’t figure out how).

All the stories involve the supernatural, or Cambodian beliefs. I’ll put more up in coming weeks. Any feedback would be much appreciated.

So would stars and ratings and comments, but feedback is even better.

Little Sophea was pretty. “Such gorgeous eyes,” the women who came to the village shop would say, and pinch her cheek. “Such a cute little dimple.” That was when she was small and clung to her mother’s leg. “So sweet!”

Her mother, whose shop it was, would shake her head and say, “But her mouth is too big and her skin is too dark, and she’s really very naughty,” and then she would press Sophea to her side and the women would smile, because they knew the mother had to say this in case a jealous ghost was listening.

Her father was kind. She was always with him when he wasn’t out in the fields. In the evenings, as he sat outside the shop smoking and playing cards with the other men, she would have a chair of her own and when she got tired she would lay her head on his lap and he would stroke her hair. “She looks like my grandmother,” he would say to the men. “Don’t you think so?” Sopeah’s great-grandmother had been a noted beauty. “Exactly the same,” someone would say. “She’s your grandmother reincarnated.” And Sophea would smile and snuggle closer. “Tell me a story,” she would say, and the circle of men would lay down their cards and listen as her father told a story of far-off days.

When she was twelve years old her father went to live with another woman. She asked her mother when he would be coming home. “Never,” her mother said. “He doesn’t want us any more.”

The full moon was casting shadows across the white dust and the village smelled of smoke and warm cows. Sophea climbed the steps to the woman’s house. The woman had no children of her own, her husband had gone off to the city years before and never come back. Sophea had often met her in the evenings at the shop, where she would buy a packet of noodles or a bar of soap and linger by the men and their card-games in the circle of electric light. The woman had always been kind to her.

Her father was sitting at a table, eating food with the woman beside him. The corners of his eyes crinkled when he saw Sophea. “Come,” he said, indicating a place beside him. “Come and sit with us.”

She approached but did not sit. She stood in front of her father with tears brimming in her eyes. Although she was not aware of it, she was more heart-wrenchingly beautiful than ever. Two tears rolled down her cheeks.

“Why are you leaving me? What have I done? Tell me and I’ll never do it again.”

He wiped the tears with his thumb, first the right cheek and then the left, then tapped her on the lips.

With her tongue she tasted salt.

The woman collected the bowls and left the room, muttering about having to clean up.

Her father gathered her into his arms and squeezed her tightly. She could feel him through her dress, the warmth of his flesh, strength of his bones. The woman was making noises somewhere in another room, and it was just the two of them, her father and herself as she nuzzled her head into his neck.

“I love you,” he murmured with his face in her hair, softly so that only she could hear.

He squeezed her more tightly. “I’ll never leave you.”

In his arms she felt warm and safe.

2 thoughts on “Sweet Nights of the Naga King”