As a child Norman Lewis was sent to live with his three mad aunts, the first of whom never stopped weeping, the second never stopped laughing, and the third never spoke an intelligible word. Being South Wales the aunts spent their Sundays throwing stones at Sabbath-breakers, while their father, Lewis’ grandfather, dallied with his French mistress.  Eventually this lady was identified as the source of the largest outbreak of the clap ever seen in Carmarthen, and Norman was sent home.

North London, where he spent his adolescence, was quite different yet much the same. Norman’s father was a Spiritualist who channeled Indian chiefs and Tibetan lamas, but with so little accuracy that no one could be quite sure what they said; his mother, a psychic, diagnosed men, women and Pekes by the colours of their auras and cured them by the laying on of hands. True believers both, they held great hopes for their son, but he failed to develop his gifts:

“Norman dear, do you hear voices?”

“Yes mother, I hear you perfectly.”

“No dear, I mean Spirit Voices. Do you hear them? Feel Unseen Presences? See Astral Visions?” 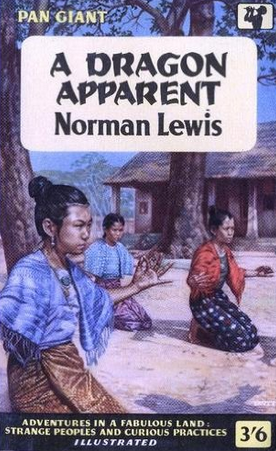 1957 paperback edition of A Dragon Apparent

On reaching maturity Norman purchased a Bugatti, married the free-thinking daughter of a Sicilian Mafioso, and became a traveller and writer. His third book, A Dragon Apparent, published 1951 following a trip to Indochina the previous year, was an overnight sensation. “A brilliant report on a period of violent transition in a strange land,” said Peter Fleming, adventurer, travel writer, and brother of the creator of James Bond; “should take its place in the permanent literature of the Far East”, said the Economist. Norman Lewis had arrived.

He judged his moment to perfection. Communism was on the rise, empires were collapsing, and the West was worried. The French were hanging on in Indochina but the Viet Minh were making misery for them in Vietnam and the Khmer Issarak, though not communists, were doing the same in Cambodia. Cambodia was nominally an independent kingdom, but only nominally. Sihanouk, installed as puppet king in 1941, was proving a handful and wished to end the arrangement whereby French citizens could not be tried in Cambodian courts and French troops could do as it wished in the kingdom. The Issarak also wanted to end these things, plus Sihanouk as well. The future of the Free World (quaint phrase today) hung in the balance.

Sihanouk would eventually come out on top, but in 1950 the issue still was in doubt. In his capacity as a journalist for the British press Lewis interviewed Sihanouk and his prime minister, who complained that the French policy of sending in the Foreign Legion to massacre any village where an Issarak presence was even rumoured, or bombing to oblivion those places the Legion couldn’t reach, was counter-productive; nothing, they told him, was more likely to turn a peaceful farmer into a rebel. The French, for their part, seemed to agree; the general commanding the French troops admits to Lewis that he is unwilling to give guns to his Cambodian troops for fear their first act will be desert and sell them to the enemy.

Politics isn’t all there is to the book – there are descriptions of Phnom Penh and Angkor, and a long passage about a bus trip through Issarak-controlled territory in which he had to be hidden under a cargo of dried fish. This had possibly been done before, but not in Indochina, not in English – Cambodia had been France’s empire, and the British hadn’t bothered themselves with it. I was struck, incidentally, by the way Lewis several times compares Cambodia to Africa – African-looking huts in which the people live, African levels of squalour and indolence. Much later Paul Theroux does the same, in his 2008 travel book Ghost Train to the Eastern Star.

So this is an important book; yet I must beg to dissociate myself from the praise. Lewis’ later books have a laconic prose and sardonic sensibility that make  compelling reading, but both qualities are pretty well absent here. Worse, far worse, is the condescending, supercilious tone he adopts towards the Cambodians. He does not get under the skin of the country, and seems unaware that the natives might be human beings with hopes and fears – apart from the hope that the French might not kill them. This is not great travel writing, although it is very good journalism. 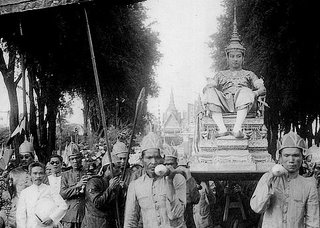 Coronation of Sihanouk, 1941. “They (the French) thought I was a lamb, but they discovered I was a tiger.”

His later books are much better. Naples ‘44, for example, is a classic, describing his experiences as an army intelligence officer in occupied Naples at the end of World War II (look for his account of General Mark Clark, who invaded Italy with typewriters and filing cabinets). Jackdaw Cake, his autobiography of his early years, is also excellent, and Voices of the Old Sea, telling of his life in a Spanish fishing village just before mass tourism destroyed the Mediterranean, is one I want to read.

Lewis’ great gift was to be present in places on the eve of some irrevocable change. In 1936 he went to Spain with his mafia-affiliated wife thinking to find peace and quite and six weeks later the Civil War broke out. He was in Burma just before the military coup that introduced fifty years of Socialism, and in Paraguay in 1975 he discovered that Christian missionaries were actively involved in exterminating the natives. A Dragon Apparent has its faults, but read it, for it falls into this tradition.

Lewis’ obituary in the Telegraph and the Norman Lewis website.